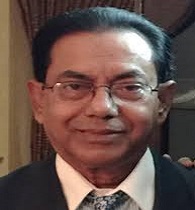 Mir Anwar has done his graduation in Medicine from Bangladesh in 1975. He did his Post-graduation in Pediatrics from Ireland in 1982. He has done his second Post-graduation in Public Health from the University of Massachusetts, the USA in 2003. He has worked as a Pediatric Consultant and Public Health Specialist in WHO/ UN around the world including Asia, the Middle East, Africa, Pacific Island, Ireland, and USA. Since 2007, he has been working in different provinces of South Africa with the Department of Health. Presently, he is working as a Clinical and Medical Manager at Richmond Chest Hospital, South Africa. His main research interest is childhood TB with HIV in Sub-Saharan Africa. He was honored by the American Academy of Pediatrics, Royal College of Health, UK, and International College of Pediatrics, etc., for his work. He is an active member of different international and national pediatric organizations. Currently, he is one of the honorary Member of Editorial Board for the Journal of Pediatrics & Neonatal Biology