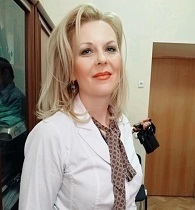 Shcherbakova Natalia graduated from the I.M. Sechenov First Moscow State Medical University (Sechenov University) in 1992 and has been studying neuromuscular pathology since 1993. The priority area of ??research by Shcherbakova Natalia is the study of myasthenic crises, seronegative myasthenia gravis (MG), refractory forms of MG and Lambert-Eaton myasthenic syndrome (LEMS). She is the author of a technique for studying neuromuscular transmission in the diaphragmatic muscle, she has developed electromyographic criteria for predicting various types of myasthenic crises. In 2004, she first described Congenital myasthenic syndrome associated with a homozygous point mutation in the promoter region of the ?-subunit of the acetylcholine receptor. She has completed her MD in the year 2008 at the age of 39 years. She is the senior researcher of Scientific Advisory Department of the Research Center of Neurology (Moscow, Russia) since 2010. She has published more than 90 papers in reputed journals.