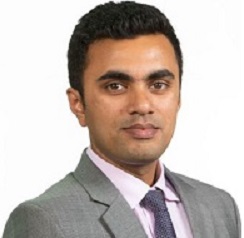 Dr Rakesh Madhyastha, MD, is a Clinical Associate in the Nephrology Department of the Medical Subspecialties Institute at Cleveland Clinic Abu Dhabi. Prior to joining Cleveland Clinic Abu Dhabi, Dr. Madhyastha was a Specialist Nephrologist for Dorset County Hospital NHS in Dorchester, United Kingdom. Dr. Madhyastha received his medical degree from Ramiah Memorial Hospital in Bangalore, India. Upon graduation, he completed his residency in Internal Medicine followed by further specialization in Nephrology at Ramiah Memorial Hospital. After completion, Dr. Madhyastha relocated to the United Kingdom where he obtained additional Nephrology training in Dorset County Hospital NHS in Dorchester. Overall, Dr. Madhyastha has extensive training in all aspects of Nephrology including renal transplant, acute kidney injury, dialysis and nephrotic/nephritic syndromes.

Introduction: Acute kidney injury (AKI) often occurs in patients supported with Extracorporeal Membrane Oxygenation (ECMO). It frequently evolves into chronic kidney damage or end-stage renal disease and is associated with a reported 4-fold increase in mortality rate. ECMO itself may contribute to maintaining kidney dysfunction through several mechanisms The reported incidence of new-onset AKI after ECMO in adults is 70.3%–84.4%, and approximately 60% of patients who receive ECMO require renal replacement therapy (RRT) (2-5)

Methods: We conducted a retrospective analysis of 47 adult patients receiving all forms ECMO between March 2015 and  April 2018.  The study was designed to look into the renal outcomes in these patients. We analyzed data for adult patients undergoing all forms of ECMO between March 2015 to April 2019 in our institute. We looked at the post -ECMO renal outcomes for the development of Chronic Kidney Disease (CKD), persistent requirement of Renal replacement therapy (RRT), full renal recovery at the time of discharge and death. Development of AKI was based on KDIGO 2012 definition

Conclusion: In this study, we conclude that ECMO poses a serious risk for AKI and being on ECMO is an independent risk factor for not only developing CKD but mortality as well.  Bigger and prospective studies are needed  in this field to identify risk factors and preventive strategies to improve morbidity and mortality in patients on ECMO