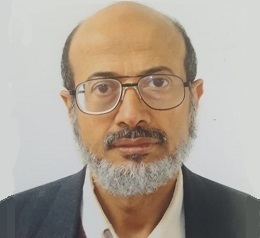 Title: The necessity and feasibility of gradual introduction of every other day hemodialysis schedule

Certificate of Jordanian Board on Nephrology: Feb 2000

rotations and activities; not setting for the fellowship exam for being restricted to Saudi

citizens at that stage)

because of the country crisis in August 1990. The four years of training were then completed

importance of another certification in Internal Medicine (NB: All medical and non-medical

Internship in Kuwait teaching hospitals: with Distinction in Obstetrics & Gynecology, Pediatrics & Surgery: Sep. 1983- Dec.1984 (Internship was started as two years program then reduced by MOH to the usual period of one year)

Ranked first in the overall Kingdom of Saudi Arabia certification for Preparatory Certification:

Head of Nephrology section since August 2013

A member of the Formulary and Therapeutic and of the ethics committees in KFSH-D in addition to being a member of other less active committees: the ethical committee, religious committee and the patient advocate committee. I supervised KFSHD outreach renal care for several while it was active (inactive over last three years because of understaffing). I maintained a proactive attitude toward the Hospital development and wrote many ideas in this regard.

Examples of Other Past Hospital and Medical Activities:

Cared for pediatric renal patients (no pediatric nephrologist was available in KAH hospital, Tabuk for several years between 1997-2004).

Provision of medical coverage for burn patients for about a year at KAH, Tabuk

National Editorial Board member for the Saudi Journal of Kidney Diseases and Transplantation.

Worked essentially only in University or teaching hospitals. Participated in teaching medical students, residents (rotating in nephrology services), fellows (within fellowship training) and nurses. In addition, lectured repeatedly to colleagues from other medical specialties on renal and non-renal subjects. Teaching remained an essential component of my practice (for both in and outpatients) equally directed to colleagues (physicians and nurses) and patients and patients relatives.

Supervised, reviewed and rewrote most of the chapters of " the Transplant Patients Education Booklet".

Organized The " Workshop on Acid Base and Electrolytes Disturbances ", NWAFH-Tabuk, on 25th June, 2005. The course was recognized for 5 hours by the Saudi Medical Council.

One of the teaching staff for the medical residents and nephrology fellows at KFSH-Dammam in the period of 2009 till July, 2016.

In addition to giving lectures to GP colleagues and contributing to many medical activities as stated above.

Arranged and supervised seven education and discussion seminars with renal patients and their relatives.