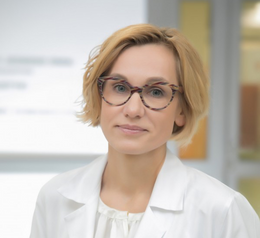 Wioletta K. Szepieniec graduated medicine from the Jagiellonian University in Krakow and did her specialization in gynecology and obstetrics in Germany where she worked for 10 years. Her main focus over the years and still to today is urogynecology but also breast surgery and aesthetic gynecology. In 2014 she moved to Poland where she has continued her work in urogynecology and operative gynecology. She is currently senior doctor of the Department of Gynecology and Urogynecology at Andrzej Frycz Modrzewski Krakow University

Introduction  and  methods:  The  aim  of  this  study  is  to  show  a  novel  approach  of  the  repair  of  the  lateral  paravaginal  defect  causing  the  cystocele.  The  extraperitoneal  (preperitoneal)  approach  has  its  advantages  and  can  be  used  in  patients  with  comorbidities  and  in  obese  patients.  The  main  advantage  of  this  procedure  is  omitting  of  the  pneumoperitoneum  and  of  the  Trendelenburg  position  during  the  operation.  The  avoiding  of  peritoneal  adhesions  is  also  important.

Conclusion:  Preperitoneal  laparoscopic  lateral  defect  repair  is  a  relatively  fast  operation.  It  is  feasible  also  for  obese  women  and  for  patients  with  cardiac  risk,  because  of  the  omitted  Trendelenburg  position  and  pneumoperitoneum.  Postoperative  can  be  achieved  a  very  satisfied  effect  with  the  reduction  of  patient’s  complaints  and  reduction  of  the  cystocele.