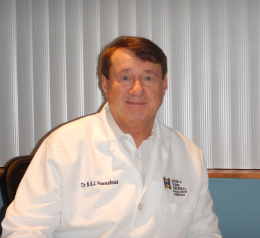 Nicholas Pairaudeau has been an Obstetrician and Gynecologist in practice since 1976. He trained in Obstetrics and Gynecology in the United Kingdom, Kings College Hospital, London University and transferred to The University of Toronto in 1973. In 1976 He took up his specialist practice at North York General Hospital, an affiliate of the University of Toronto. He still has a very busy practice of both Gynecology and Obstetrics, teaching, mentoring, as well as striving to be innovative in practice. He travels extensively, particularly in China, where he has visited from the North to the South, and he has been involved in teaching, mentoring, and assisting.  He is also a member of the Royal Society of Medicine, Royal of Surgeons Canada, SOGC, ESGE, AAGL, as well as an active member of the SLS, which is an organization based out of Florida in the USA.

Introduction: Post-Partum Haemorrhage as defined by a blood loss of more than 500 ccs at vaginal delivery, and 1000 cc at C section is a worldwide Issue and is the leading cause of maternal mortality. It occurs between 5 to 15 % of deliveries, though rates vary in different parts of the world.

It appears from the world literature that this rate is increasing and is attributed to many causes including the association of increased labour induction, augmentation of labour, previous C section, placenta previa, and abnormal placentation.

After many years of watching how we conduct labour and delivery, despite this association of PPH and maternal morbidity and mortality, the use of new drugs and procedures the figures seem to rise. I see some marked deficiencies in the way we conduct a normal labor and delivery, and management of the third stage. With the advent of delayed cord clamping, and cord blood banking, the chances of post-partum haemorrhage can increase.

The proper management of potential post-partum hemorrhage starts in the prenatal clinic, a risk tool for PPH in Labour and delivery, the appropriate management of labour, and care in avoiding bleeding from perineal laceration or episiotomy and making every effort to get the uterus to contract. Medications to assist in the uterus to contract are recommended.  A normal placentation and with strong uterine contraction, the placenta will usually be delivered by 15 minutes. Care must be taken to check the placenta and that it is complete. Careful observation of the post-partum patient in the hour or two after delivery is paramount as up to 25 % of PPH occurs after leaving the delivery area.

With a full understanding of the antecedent factors leading up to a PPH, a very significant drop can be expected if standard precautions are taken. Even in the best hands however PPH can occur, and the sequence of practices that can deal with this mostly treatable complication of pregnancy will be outlined.

This session will go over the full picture from clinic to discharge from hospital and later 4 to 6-week post-partum check. Cases will be presented, and it is hoped that delegates enrolled in this session will bring their own cases too.

Conclusion: PPH contributes to significant morbidity and mortality in the world today, despite new drugs, devices and interventions. The session will allow us the explore the prevention, careful management of the three stages of labour, and reduction in PPH rates without incurring huge costs.