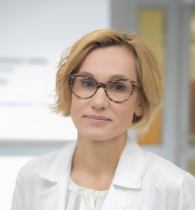 Wioletta K. Szepieniec graduated medicine from the Jagiellonian University in Krakow and did her specialization in gynecology and obstetrics in Germany where she worked for 10 years. Her main focus over the years and still to today is urogynecology but also breast surgery and aesthetic gynecology. In 2014 she moved to Poland where she has continued her work in urogynecology and operative gynecology. She is currently senior doctor of the Department of Gynecology and Urogynecology at Andrzej Frycz Modrzewski Krakow University