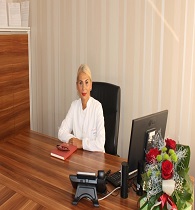 Danijela Djukin graduated from the Faculty of Medicine and specialization in Belgrade. As an ophthalmologist-ophthalmosurgeon, she worked in the Bijeljina hospital, performing complex operations with the most modern methods. The title of primarius was awarded to her in 2015. The winner of the gold medal is Filip Višnji?. 2007 she was named one of the most influential women in Republika Srpska. On the function of acting Director of the Bijeljina Health Center was appointed in August 2020.