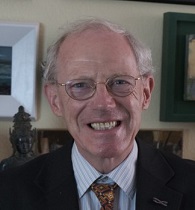 Title: Legal obligations and how can be used: The Principles on Climate Obligations of Enterprises

Jaap Spier specializes in liability law. As Senior Associate University of Cambridge Institute for Sustainability Leadership, his chief objective will be to map the specific legal and moral obligations of the most important players in the public and private sector concerning global challenges such as climate change and plastic debris in the world’s oceans. The aim is to articulate these obligations in the form of ‘Principles’ together with eminent external experts. Spier also holds an honorary chair at the University of Stellenbosch (South-Africa). He is a senior fellow at the Gobal Justice Program Yale University and member of the scientific advisory board of ClimLaw Graz.

Jaap Spier (1950) graduated from Erasmus University (Rotterdam) in 1973, has been an attorney at the Bar of Rotterdam until 1977, lecturer of private law at Leyden University (1977 – 1981), and company lawyer, Unilever NV (1982 – 1989). In the latter capacity, he has been active in the fields of private, commercial, and environmental law and financial instruments (such as bonds and swaps). In 1989 he was appointed Professor of private and commercial law, Tilburg University (1989 – 1999). In 1997 Jaap Spier was appointed Advocate-General in the Supreme Court of The Netherlands; as from 1999 he also is an honorary professor at Maastricht University.