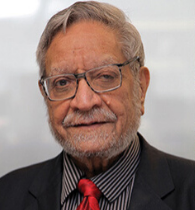 Dr. Dhalla has published more than 620 full length papers in refereed journals and 180 papers in books and monographs. His research work has been cited more than 23,000 times and he edited 55 books on various aspects of the cardiovascular system. He has been an invited speaker at more than 355 national and international conferences and 145 institutions. Dr. Dhalla has trained more than 163 graduate students, postdoctoral fellows and visiting scientists. In his capacity as Secretary General and President of the International Society for Heart Research, he was engaged in promoting the scientific basis of cardiovascular medicine for 25 years. He has been Editor-in-Chief of a major international journal “Molecular and Cellular Biochemistry” for the past 30 years and is also serving as Executive Director of the International Academy of Cardiovascular Sciences since 1996. He has received 190 honours and awards from all over the world including MD/DSc Honorary Degrees from 6 Institutions and Honorary Professorship from 4 Universities.

Dhalla is Honorary Life President of the IACS and is serving as Distinguished Professor, University of Manitoba and Director of Cardiovascular Developments at the St. Boniface Hospital Albrechtsen Centre, Winnipeg, Manitoba.