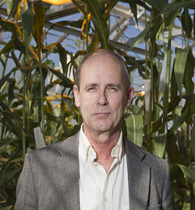 Title: Plant genetic determination of the species and roles of arbuscular mycorrhizal fungi in the productivity of grass biomass crops

Jeff Bennetzen received his PhD in 1980 from the Department of Biochemistry at the University of Washington. After a one year postdoctoral experience shared between labs at Stanford University, UC Berkeley, and Washington University, he set up his own laboratory in 1981 at a biotech company, and then took his first faculty position in the Department of Biological Sciences at Purdue University in 1983.  Since 2003, he has been the Giles Professor of Molecular Biology and Functional Genomics at the University of Georgia.  He has been an editor or editorial board member for numerous journals, has published more than 250 research manuscripts, and is an elected member of the US National Academy of Sciences, American Association for the Advancement of Science and Indian National Science Academy. His lab is known for its research on plant transposable elements, genome structure, genome evolution, disease resistance genes, and orphan crop genetic diversity. Recent studies have included analysis of biomass crops, including analysis of the root microbiome changes associated with domestication and variation in crop productivity.