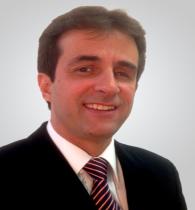 I was born in 1966, in Brazil. In 1985, I started my undergraduate degree in Dentistry at the Federal University of Minas Gerais, graduating in 1989, when I started in the profession, working in the dental office.

I did orthodontic specialization for 3 years from 1995 to 1997 when I became orthodontist and started teaching in the specialty . In 2002 I became a specialist in Jaw Functional Orthopedics by the Federal Council of Dentistry.

I took 3 years of master's degree in orthodontics, starting in 2001 and becoming a master in 2003.

Invitations to lectures and courses became very frequent, increasing my dedication to teaching. Since 2011 I teach courses in several cities in Turkey, such as Istanbul, Ismir and Antalya, several times a year, as well as receiving Turkish students at our college in Brazil.

I am Scientific Advisor of the Ortho Science Journal/Brazil and Head of the department of Orthodontics and Dentofacial Orthopedics in Modal Faculty in Belo Horizonte.

I work with great love for the profession, always aiming to bring the best of Orthodontics and of Jaws Functional Orthopedics in every corner of the world.